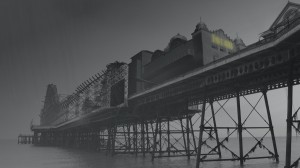 Have entertained the notion recently that the Twilight would look like a pavilion and it and the Rubicon rollercoaster, essential parts of the film, would be on a rotting pier rather than on the edge of a cliff. Radical I know. To help illustrate this I’ve done a rough mock up of what I mean. The Rubicon is at the back of the pier with the end part missing as per accident in 1973. The pavilion is a basic 3d model I’m working on based on the original pavilion at Victoria Pier in Colwyn Bay which itself was destroyed by fire in 1922 (the actual pier still stands but sadly has fallen into ruin). The pier structure used in this composite is a photo I took of the pleasure pier at Eastbourne. Click on the picture to enlarge.

Let me know what you think and whether the new look Twilight could be the way forward. Is it spooky or dangerous enough? Does it make you want to know it’s story, especially the collapsed roller coaster at the end? Feel free to add comments below. More composites to come!

Made a new BBC ident - not sure they’d use it.

In Blackpool to do yet more production photography

Fun morning reacquainting myself with this old fri

Nice to notice some familiar names on Blackpool’

Spent today doing Automation entirely on my own in

Check out the Twilight Ballrooms Movie Diary at ww

Be most impressed by my home made focus card on a

Colours sounds and shapes. Music by me.

Back in the day this would have taken all morning

A demonstration on the wonders of stabilising foot

My own attempt at the opening credits. Original mu

My first co-production with my (7 year old) son.

Messing about with 3D buildings. Music by me. #ele

@abbots.langley.players were having a props sale a

I was experimenting with VC Metro pack and wanted

Buster Cristo in a pub called The Severed Arms in

This website uses cookies to improve your experience while you navigate through the website. Out of these, the cookies that are categorized as necessary are stored on your browser as they are essential for the working of basic functionalities of the website. We also use third-party cookies that help us analyze and understand how you use this website. These cookies will be stored in your browser only with your consent. You also have the option to opt-out of these cookies. But opting out of some of these cookies may affect your browsing experience.
Necessary Always Enabled
Necessary cookies are absolutely essential for the website to function properly. These cookies ensure basic functionalities and security features of the website, anonymously.
Functional
Functional cookies help to perform certain functionalities like sharing the content of the website on social media platforms, collect feedbacks, and other third-party features.
Performance
Performance cookies are used to understand and analyze the key performance indexes of the website which helps in delivering a better user experience for the visitors.
Analytics
Analytical cookies are used to understand how visitors interact with the website. These cookies help provide information on metrics the number of visitors, bounce rate, traffic source, etc.
Advertisement
Advertisement cookies are used to provide visitors with relevant ads and marketing campaigns. These cookies track visitors across websites and collect information to provide customized ads.
Others
Other uncategorized cookies are those that are being analyzed and have not been classified into a category as yet.
SAVE & ACCEPT