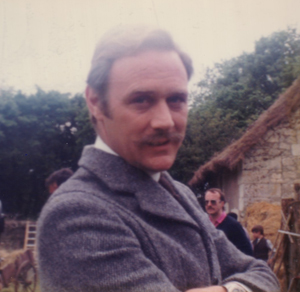 Christopher Cazenove on location with “Kane & Abel” in France, 1985

Christpoher Cazenove passed away last month. I was priviledged to have worked with him, albeit 25 years ago on the American TV miniseries “Kane & Abel”. I featured the clip in last Octobers blog (click here to see) This clip contains a small scene when the Abel family, en route to the church to baptise the new found infant, bump into his character, the Baron. Cazenove shot the close up takes on top of a step ladder rather than a horse and I remember being impressed by this simple trick of filming. Our scenes were filmed at the Château d’Ussé, France