Today I had the privilege of being given a personal tour round the animation studios of Uli Meyer, a local based artist here in Camden Town. He has worked with big animation companies such as Warner Brothers, Touchstone, Disney & Universal to name a few. But it is his collaborative work with the late Ronald Searle, creator of the infamous St. Trinians School, that appears not only to be a personal highlight of his career, but a heavy influence on it. 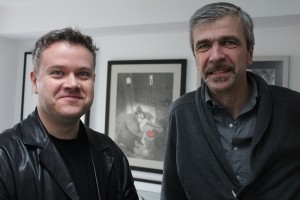 His studio (for an artist) is incredibly tidy and organised but there is no doubt who rules the office. The characters themselves! Sketches, models, huge ink drawings all portraying the most fantastic clan of animals, ghouls, misfits and eccentrics both good and evil. Each character, like Night At The Museum, is frozen still by the arrival of us real people, but when the office lights are out, I imagine they run riot like Gremlins.

The studio is large and certain areas dedicate themselves to specific tasks – video editing, modelling, computer graphics and sketch room. The hallway serves as a gallery and hung on the stairs is a picture I’ve seen before. I’m here to purchase it and am relieved that it’s not been snapped up before my arrival today. The picture shows a tramp finding a discarded heart in the dustbins. In the background a silhouette at the window is heavily quaffing a bottle of wine. Though there is no title on the frame, Uli’s eyes light up when he tells me the title. “It’s called Trashed“. The picture is part of a series of similarly themed pictures, by Uli, based on the universal theme of love. Other pictures from the series are also in the hallway and all feature a bright red heart, the only colour in these great ink drawings.

Do check out his blog which shows some of his amazing artwork, some completed, some in various stages of evolution! Now I can’t wait for the building works in my flat to complete so I can take this, my first ever piece of purchased art, home to hang on my wall.